A Guide to Trucker Slang 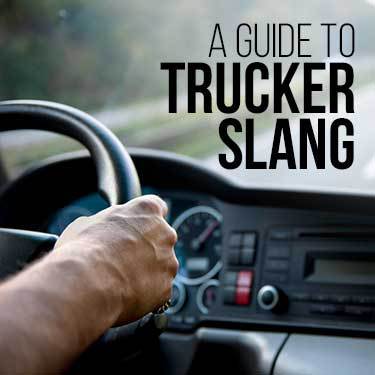 Part of the trucker slang’s trucking culture is having awesome slang, nicknames and numbered codes which truckers use to communicate via CB Radio.

RECENT Articles
Truck Driver Emergency Kit: 12 Items in Case of Disaster
All kinds of emergencies can occur when you’re a truck driver. Be prepared by having an emergency ...
11 Hobbies For Truck Drivers: Staying Busy On the Road
If you get bored during your free time on the road, then try one of the many hobbies for truck drive...
See Full Article List  >

If you are a seasoned trucker, you know that trucker slang makes up a huge portion of conversations over CB Radio and at truck stops. Trucker slang is a whole language in itself and in order to fit into trucker culture, you’d better get learning. If you are seeking a change and looking to start a new career as a trucker - or perhaps you’re already a trucker and you’re unhappy with the company you currently work for - check out this fun article on trucker slang and how you can be a happier, healthier truck driver with a better career than ever before!

Part of the trucker slang’s trucking culture is having awesome slang, nicknames and numbered codes which truckers use to communicate via CB Radio. CB Radio helps truckers keep in touch on the road, helping them warn each other of traffic, safety concerns, or generally chat about anything and everything under the sun! It might sound like gibberish to the average listener, but to truckers, their second language truly is the trucker slang they learn while on the road.

Why Do Trucks Use Trucker Slang?

Why do truckers use trucker slang? Well, firstly, truckers began using slang as a way to communicate over the CB Radio, which was regularly listened to by police and other drivers tuning into the radio. Since then, truckers use this fun and sometimes salty language to tease each other, make their communications over CB Radio more efficient and also have fun together while driving.

If you have never heard trucker slang before, the first time could be a little shocking. After all, this slang is practically a whole other language that truckers have created, cultivated and developed over time.

Here, you will find out some popular trucker slang, as well as learning more about how CB Radio operates as a network for truckers. Read on to find out more about how to use trucker slang and how best to engage with the trucking network around the USA - as well as how Truck Driving Jobs can help you find the perfect driving job for you and your family.

Although police officers are essential workers who play an important role, they have not had the best relationship with truckers in the past. Hence, trucker lingo for cops was born. Police officers tune in to CB Radio and often communicate over it too. Trucker lingo for cops is occasionally derogatory but mostly just harmless slang for when you see a cop eyeing up the road, to let other truckers know they are there.

So what are some crucial pieces of trucker lingo for cops that you need to know? Here are the basics.

Every trucker has a nickname - also known as a handle. You can pick your own trucker nickname as part of your trucker slang, or you might be given it by another trucker who is ready to sign you up for life to this new name of yours - whether you like it or not! Having a trucker handle is one of the most fun - or most embarrassing - parts of truck driving life. Here are some hilarious trucker handles heard at truck stops, on the side of the road, in the parking lot and on CB Radio!

In addition, truckers also have our own trucker slang for cities around the US. Boston MA, in the trucker world, is Beantown; Orlando is Mickey Mouse; Las Vegas is Lost Wages and California is Idiot Island. These can be pretty hilarious to the average person if they catch a trucker talking about heading over to Idiot Island on a job. You can’t say truckers don’t say it like it is!

Irish truckers have long used slang which has started transferring over into the United States too. If you hear any Irish truckers on the CB Radio, expect to hear ‘yoke’ and ‘tang’ flying around like there’s no tomorrow!

Alright, so we’ve already discussed CB Radio. CB Radio has been around since 1945, can you believe it? These were designed for people to have personal communication and have since become the primary mode of communication for truck drivers on the road. Seeing as it is illegal to use your cell phone while driving, CB Radio, although it is an ‘old’ method of communication, is still the best way to talk to other drivers when you are out on the road.

As a trucker, your primary concern should be the safety of yourself and other drivers on the road. CB Radio isn’t just used for banter and general chit-chat to combat boredom while driving, although this is often the case. Here are some uses for CB Radio which remain relevant even in the technological age.

If a truck driver encounters an accident up ahead or discovers the roads to be icy, the weather dangerous or any other safety concern like a tire on the road, they can and will use CB Radio to warn other drivers in the vicinity. Truckers drive alone, but they are a community who look out for each other nevertheless. Although GPS devices often include safety warnings, the best perception is human perception. Even if your GPS shows the traffic up ahead, it is still good ethics to warn the other nearby drivers using the CB Radio.

If you are in constant communication with surrounding truckers, you can give them updates on the nearest truck stops, any police hanging around on the side of the road or any other updates you feel are important. Plus, you can practice your CB lingo with truckers on the road and keep yourself entertained throughout your long drive.

A lot of trucker lingo has been turned into popular phrases which are used by everyday people who aren’t anything to do with the trucking world. Plus, trucker lingo has some seriously cool historical references. Here is some trucker lingo which you probably didn’t know had some fascinating origins!

What Does Rubber Duck Mean in CB Talk?

A rubber duck is the first vehicle in a convoy. If you hear a trucker talk about a ‘rubber duck’ it is the vehicle in front in a line of vehicles heading to the same destination. Often, trucks can drive in convoys along the highway which can make passing a little more dangerous for other cars. That’s why convoys tend to stay in the slow lane, for safety reasons.

Another similar term which shouldn’t be confused with Rubber Duck is Rubbernecking, which means a driver who delays a traffic jam by sticking their head out and looking back and forth to look at what is going on. This kind of bad habit isn’t appreciated by fellow truckers and is the kind of thing that will get you called out over the CB Radio!

If you hear 42 on CB it means ‘Okay’ or ‘Gotcha!’ It’s really as simple as that. There are similar versions like 10-4, but 42 is the one which is most popular in trucker slang.

Number codes are used on CB Radio to communicate in a simple way to other truckers; here are some common number codes used in trucker slang!

Apply for a Trucking Job with ABCO Transportation

At ABCO Transportation, we can offer you an unbeatable truck driving career. Now you know how trucker slang works, you are ready to hit the open road and immerse themselves in the trucker culture. As leaders in the trucking industry, we can offer you the career change you have been looking for by providing friendly, helpful advice on how to get started as a trucker. If you had never considered this career before and just clicked on this article out of curiosity, make sure you enquire about how a career as a truck driver could work for you, your family and your finances alike. You never know just how well suited you could be for a career in this amazing business!

If this article has opened your eyes to the fun, banter-filled culture of truckers then you can contact us further by calling us at 866-980-2710 and fill out our trucking job application! Truck drivers are essential workers who keep the world going; plus the job comes with awesome pay and great support from our experts who value your experience as a driver. You will never find a more considerate and better experienced company than ABCO Transportation. Trucking is more than just trucking slang - it’s an awesome lifestyle out on the open road which takes you over the horizon and beyond.