Best Cities For Truck Drivers To Find A Job 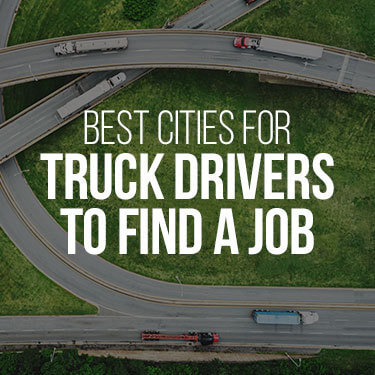 Changing the city you work in can benefit you as a truck driver. Check out some of the best cities for truck drivers we’ve listed below if you’re considering making a

RECENT Articles
Semi Truck Maintenance Checklist: Basic Rules To Follow
With our semi truck maintenance checklist, you’ll know exactly how to take proper care of your tru...
How To Stay Healthy As A Truck Driver On The Job
Staying healthy as a truck driver is extremely important to be comfortable on the road. We’ve list...
See Full Article List  >

Finding the best cities for truck drivers can really make your head spin. There are so many factors that you’ll have to consider before making a decision like that. Make that decision a little bit easier by considering these important factors.

The best cities for truck drivers vary depending on factors like pay, driving conditions and job availability. Chicago, IL is the best city to work in if you’re a truck driver looking for a good salary. If you want to be in a city with a thriving truck industry, then Memphis, TN is the city you should go to.

We’ll explain we these are the best cities for truck drivers based on each factor and the benefits of living in each city.

Being a trucker is a tough job and you deserve to get paid a good salary. If you’re looking to make a city that pays its truckers well your place to call home, then consider some of the options below.

Out of all the cities we’ve listed, Chicago pays its truck drivers the best wages. On average, truckers operating in Chicago make around $83,697 a year. Chicago values it’s truck drivers and truck driving industry for numerous reasons. For one, Chicago has an extremely large freshwater port.

This means that the city needs truckers to bring freight into the port so it can then be transported into Canada. Likewise, goods coming in from Canada need to be picked up by truck from the port.

The second reason is that Chicago is the third-largest U.S. city by population. As is often the case in many large cities in the U.S., there is a tremendous amount of freight that needs to be transported from the city to other destinations. Some popular goods that are transported from Chicago include the following:

Lastly, Chicago was once a city that relied heavily on rail transportation. Now that rail shipping isn’t used nearly as much, trucks have filled the void. This has created a demand for trucks to cover the ground that rail once did.

In Columbus, truck drivers get paid exceptionally well compared to other drivers in the country. The average base salary for truck drivers operating in this city is $83,128. There are a variety of different products that are transported from Columbus and other major cities in Ohio. This includes products such as:

Goods like these need to be transported from Columbus, creating a demand for truck drivers to move the freight around within the city.

Indianapolis is another city where the average trucker is compensated very well. The average annual salary for drivers operating in this city is $74,874. There are numerous trucking jobs available throughout all Indiana. The state has a thriving trucking industry and nowhere is that more apparent than in Indianapolis.

Like with many of the cities we’ve discussed, Indianapolis is a hub where freight traveling from other parts of the country travels through. Typically, the freight that comes through this city ends up going to other major cities like Chicago, Detroit and St. Louis.

Indianapolis is important to this part of the country’s supply chain. Therefore, there is a high demand for truck drivers.

Additionally, there are manufacturing operations that are conducted in Atlanta by companies like Coca-cola. These companies also create demand for truck drivers because they need someone to transport their goods throughout the country.

Regardless of what city in Georgia you’re in, you can count on it being hot, especially during the summer. Follow our 10 summer truck driving safety tips to stay comfortable and safe.

Like Atlanta, Charlotte receives numerous amounts of freight that come through via the following interstates:

Because of the high frequency of freight that Charlotte receives, the city is one of the most in need of truck drivers in the Southeast.

If you’re going to start driving in any of these cities, you must have the equipment and gear that you need. Our article on truck driver essentials is a good checklist to figure out if you have everything you need for the road.

The Best Cities for Truck Drivers By Amount Of Jobs

If you can’t move to one of the five best-paying truck driving jobs cities, then you should look at which cities have the most job openings. The more truck driving jobs a city has, the more vibrant and stable the trucking industry there will be. Therefore, you should consider jobs in some of the cities we listed below.

Numerous small trucking businesses have only recently started. These companies create more jobs for truckers and offer the people in Memphis more carriers to choose from.

Omaha has the second-largest amount of truck driver jobs. Around 11,900 truckers are operating out of this important city. Omaha requires a large force of truck drivers to transport all the freight that comes through it, particularly agricultural products.

Nebraska produces and transports agricultural products outside of its borders and to other states. Since the state is located practically in the center of the country, most freight shipments going east pass through the city.

The state capital of Iowa boasts a sizeable number, with 7,160 working within the city. Des Moines is located just about dead center in the state of Iowa. Interstate 35 goes through the city from north to south while interstate 80 cuts across east to west. These two factors make Des Moines another city where goods traveling in out of this part of the country travel through.

This need to transport so much freight creates a demand for truck drivers in Des Moines. Some of the popular products that travel through the city are:

Trailing not too far behind Des Moines in truck driver jobs in Springfield. This city employs around 6,360 truck drivers to handle its freight operations. Springfield is between St. Louis and Kansas, located to the city’s east and west, respectively. Both of these cities have a high demand for their goods.

Any freight that needs to get to these two locations often starts its journey in Springfield. Because of the demand for products from these two large cities as well as other locations, Springfield requires an adequate force of truck drivers to deliver these goods.

Wherever it is you’re driving, chances are you’re going to be dealing with some type of stress. Learn how to keep that stress from turning into road rage with our article on the topic here.

Fill Out Your Application and Join the ABCO Team

No matter what city you’re looking to drive in, ABCO is the company for you. We have drivers located across all 48 contiguous states.

At ABCO, we understand our truck drivers are the backbone of our company. As such, we provide our drivers with flexible schedules, giving them a healthy work/life balance. Our company also has numerous resorts located around the country when you’re ready to take a well-deserved vacation.

Lastly, you’ll never make less than $67,000 a year when you work with ABCO. If anything, you might make more based on your level of experience.

Start your journey to working for a company that cares about you by filling out your job application today.