Top Truck Driving Songs You Need on Your Playlist 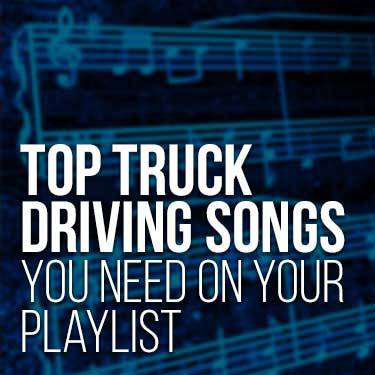 The top truck driving songs you need on your playlist to get you through a long haul is the most important item to remember before you leave for your trip.

RECENT Articles
9 Truck Driving Tips For Mountain Roads: Safe Practices
Our truck driving tips for mountain roads will help you stay safe when you have a shipment that will...
9 Simple Fuel Saving Tips For Truck Drivers
Diesel prices have skyrocketed and truck drivers have been hurt the most. Follow our fuel saving tip...
See Full Article List  >

When it comes to driving a truck, one of the best things to keep you entertained is the sounds of great music, and this is when some of the top truck driving songs come in. It’s relaxing and can help you get through hours of driving when you least feel like it.

Whether you are driving at night, during the day, or early morning, the top truck driving songs you need on your playlist to get you through a long haul might be the most important item to remember before you leave for your trip.

We have put together some of our favorite songs to help you get through the day’s shifts of driving.

How many times do you hear the same old songs on the radio, which gets a little dull? Why not add some humor and entertainment to your journey and take a listen to our roundup of funny truck driving songs to listen to on the road? We are sure manyof these will make it into your top truck driving songs playlist.

Just the thought of trucking in your underwear might make you chuckle and that’s what this song achieves. Released in 2015, this country song will brighten up your journey in no time.

On the Road again was released in August 1980 and has a real feel-good factor to it. It has also featured in a couple of films and TVseries, making itself known worldwide.

Weird Al Yankovic is an American songwriter known for some hilarious parodies, such as Gangster’s Paradise. Driving A Truck with My Heels on will put a smile on your face and have you singing along in no time!

Another song from Joey Holiday, but it’s hard not to include him in the list of funny truck driving songs. This song features in his 18 Songs for Truckers Only, Vol. 5 Album.

Released in 1988, L’il Brother has released plenty of songs which are funny and great to listen to when passing the time on the road.

There’s something about an old school track that means even if you don’t want to, you will be singing along in no time. Packed with feel-good rhythms and a whole load of nostalgia, these classics will make your journey feel that much quicker.

This song was released on March 12, 1988, reaching the first position on Billboard’s US Top country songs. A great classic that will have you belting along as you speed down the highway.

Some truckers will declare this as the greatest trucking song ever and some will say it’s their guilty pleasure. With a great rhythm, it’s a must to add to your playlist.

Ranking No. 1 in 1989, Big Wheels in the Moonlight was written by Dan Seals and Bob McDill for the album Rage On. It’s a catchy tune that you’ll find yourself humming to yourself long after the 18 wheels  is done.

A great voice, it will be hard for anyone to fill Merle Haggard's shoes in country music! Merle Haggard’s album: Today I Started Loving You Again has been listened by millions and is guaranteed to impress when added to your truck driving songs list.

Roll-On 18 Wheeler was released in January 1984 by Alabama and written by Dave Loggins. It skyrocketed several times to the top of the billboard charts. Take a listen, and you’ll soon see why!

While the funny and classic truck driving songs are sure to be a hit, the following suggestions are not only catchy but the top truck driving songs of all time (in our opinion!) The best can be subjective so if we’ve missed any of your favorites, let us know.

CW McCall is well known within the trucking industry due to his many successful albums that he released throughout his career. Convoy was one of his more successful songs, reaching number 1 in several charts.

Streamed by many millions, Driving My Life Away was a very successful song sung by Eddie Rabbit and co-written by Even Stevens, David Malloy, and Rabbitt. The song is one of those songs that will instantly put you in a good mood while driving.

Prisoner of the Highway was recorded by Ronnie Milsap and released in the album One More Try for Love. This song unfortunately never made it to number 1; however it did rank strongly within the billboard charts at number 6.

Teddy Bear was released in 1976, alongside his album, which was called the same. Within five weeks, Teddy Bear managed to reach number 1 in the US charts and a couple of number 1 positions in the Canadian charts.

Get a Trucking Job with ABCO Transportation Today

There are so many songs that we could have chosen when putting together our top truck driving songs for your Spotify playlist or Youtube playlist for your listening pleasure. Have you thought about being a truck driver with ABCO Transportation or looked into the benefits that it brings? No matter your position, browse the many CDL A driver jobs we offer nationwide, including trucking jobs in Ocala, FL. Also check out our truck driver pre driving inspection checklist for other items to check off before your trip.

Our customer support team is available to call up and ask any questions or support you with your search. Please, give up a call on (866) 980-2710 and fill out our trucking job application so that one of our representatives can get in touch to arrange a call with you.